We reached our Cottage late in the afternoon. The cottage was on perched on top of a hill and was nothing like the modern hotels,as the cottage was built in 1960s so it was very different and it showed in furniture, ceilings and almost everything. The cottage had an awesome balcony. It was an awesome place to stay. Our rooms were on the first floor.

Everyone was tired after the ride and a number of baths. So as soon as we entered the room everyone crashed down. The bed was burdened by weight of 8 people and most of them were big in size. Just as I laid down on the bed, someone said only 6 beers are left, we need more drinks. Now, it was on me to get a whiskey from a wine shop which I didn’t know about. Luckily it was few meters from our cottage but  the whiskey was very expensive as compared to in Delhi.

Back to Hotel, it was time to eat more and we ate like Demons, Demons who were offered food after months. 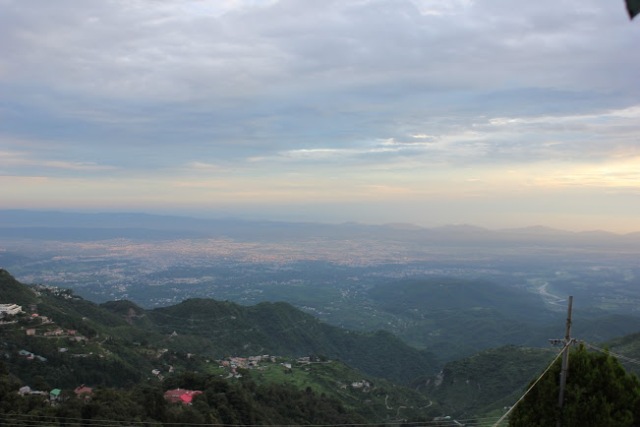 After all the hoopla, it was evening and it was time to go out on the Mall Road. Mall Road on any hill station is the most happening place. The crowd was good, beautiful girls. I took a jacket with me, not that it was that cool outside but It would look good on me. And at one place with some blue disco lights, we stopped and what followed was another photo session. After crawling all over the market, we did some shopping. I bought a hat. Now instead of one hat we had three, so less fight.

We rushed back to our cottage at around 10. It was drinks time.
The glasses were out and everyone was ready. And it started and everyone was handed a glass of whiskey which was gulped down quickly. Another round followed and the talks were about the office. SInce, I was a new employee I got to learn about lots of people. Again the talks drifted towards normally guy topics and in the line of fire was me, fending off questions about why I don’t drink much, girlfriends and what not.

By this time, 2-3 guys were on a high and one of them started with his talks and he didn’t stop for the next 2 hours and everyone couldn’t stop laughing their ass of. It was so much fun. And now the best part, some idiot started taking Vodka shots and next in line was me. I was handed over half a glass of vodka shot, CRAZY. The glass used for drinking water was filled half with only Vodka and I was like I’m not this drunk that I will drink this. But there was no other choice I had to drink it and it was not that bad. Smooth with a pinch of salt but after two more such shots I was lost in a world of my own. I had gone quiet and this is what I do when drunk.

It was time for food, an enormous order was placed 50 chapatis, 6 daal, 3 vegetables, 3 curd and the monsters consumed it with ease. I was not feeling comfortable so decided to talk a walk in the lawn and 3 more guys in a state similar to me followed. First of all, I was barely able to walk and just as we reached in the lawn, it started pouring and we had to jump back. But these 5 minutes made me feel alot better. We returned to the room only to find that the puking session has begun. Luckily I was OK.

We got up late in the morning and I had no hangover. Woke up very fresh and full of energy. After a cup of coffee we were getting ready for another beautiful day. At 12 we were in the cabs and heading towards the KEMPTY FALL.