Book Review: The Test of My Life – Yuvraj Singh 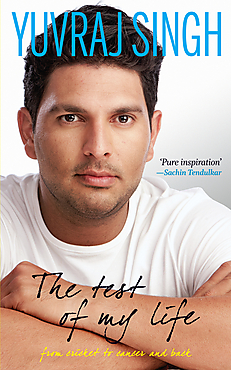 Author: Yuvraj Singh
Genre: Autobiography
Rating: 3.5/5
The Test of My Life is an autobiography of Yuvraj Singh in which he describes the ups and downs of his career. “The story of his toughest days and how he managed to come out of it.” It’s the story of not just his triumphs but one of the most biggest setbacks and his comeback from life threatening cancer that could have ended his career.

Being a Cricket Maniac, The Test of My Life an autobiography by Yuvraj Singh was highly awaited. I got the book the very next day it was launched. It is the only book I have read in one go and it was a joy to read the book. The book gives an account of Yuvraj’s troublesome childhood and I was amazed to know that YUVI didn’t want to be a cricketer but was forced in to the sport by his dad Yograj Singh, another former International Cricketer but who couldn’t achieve much success. But he wanted to fulfill his dreams through his son.

The Test of My Life is a book of two stories. One of Yuvraj’s growing up and becoming one of the most successful cricketers of Indian cricket becoming role model of millions of fans at home and other of Yuvraj fighting Cancer in Indianapolis, US miles away from home in all the loneliness. In the first story Yuvraj describes his growth as a cricketer and how he matured as a cricketer but in the second part it’s about how he changed and matured as a person, his growth as an individual.

Yuvraj writes about his Ranji Trophy campaingn, his dream debut against Australia in 2001, his ODI career and unsuccessful test career. India’s World Cup campaign has been wonderfully described. On the eve of match against England, Yuvraj wasn’t feeling fit enough to play the game but Zaheer Khan(Zak) convinced him to play the game and told him You will win us the World Cup. Sachin also told Yuvraj that “You will matter when it matters the most”. It was blown away how Yuvraj Singh played the World Cup and won it for us with Cancer brewing his body. He was constantly coughing and couldn’t eat anything during the World Cup. Hats Off to the spirit of Yuvraj Singh.

The fascinating story of a cricketer is in the backdrop of a cricketer fighting a battle against Cancer with helplessness. It’s the battle against Cancer I wanted to read more and I got emotional reading what Yuvi had to battle everyday during the Chemotherapy. He couldn’t walk, couldn’t eat, was depressed and that’s what Chemo does to you.
Yuvraj was on top of the world when he was told by Dr. Einhorn that the cncer was dead, he could be back again to leading a normal life.

In the last chapter Yuvraj talks about his emotional return to Cricket. I still remember I was desperately waiting for India vs New Zealand in Vishakhapatnam as it was the match Yuvraj would make his come back but the game got washed out. But two days later Yuvraj made his come back in Chennai. When Yuvraj walked out to bat I had got emotional and when he hit Daniel Vettori for a six, I had tears in my eyes. But the return was not so easy, it took months of beastly training at NCA, Banglore.

The book is a joy to read. The ups and downs are so well described that anybody can easily relate. The book has been co-authored by Sharda Ugra and Nishant Jeet Arora. It’s not a book about the scoreboards it’s about how life can turn full circle and should never be taken for granted. This book is dedicated by Yuvraj to his Mom Shabnam Singh, who was with him through thick and thin and in the worst moment of his lives.

Yuvraj Singh is back with a bang but as Kapil Dev siad “This too Shall Pass”.

10 thoughts on “Book Review: The Test of My Life – Yuvraj Singh”